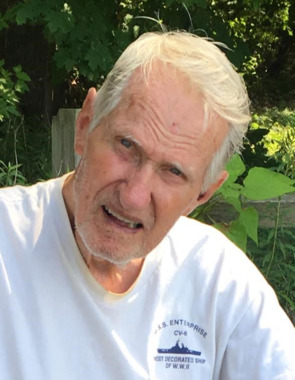 Back to Warren (Bud)'s story

With sorrow and yet joy, we announce the passing into the arms of Jesus Warren (Bud) Ward on December 3, 2019. Bud was born Warren Francis Ward on March 26, 1926 to Roy L. Ward and Frances A. (Hannemann) Ward.
Bud lived the majority of his life in Wilson, NY, where he owned and operated Ward Sales and Service Automotive Repair. Bud was also active in rifle training with the Wilson Conservation Club, was a member of the Lion's Club, and served with the Wilson Volunteer Fire Department for 35 years. With the fire department he served as Chief for eight years, instructed in fire training and as a civil defense instructor. He was active as well in scuba rescue and as scuba instructor. Bud served honorably as a WWII Navy Veteran, Firefighter Seaman First Class on numerous assignments, and on the USS Enterprise at Midway.
He married Joan H. Hornsby in 1952, whom had preceded him in death. He was preceded also by two brothers, Wallace (Wally) Ward and Roger Ward.
Bud has celebrated six children: James P.(Jim) Ward, Toni (Geering) Leffler, Randy C. Ward, Audre L. (Ward) Kimpton, Allison B. (Ward) Nungester and Timothy W. (Tim) Ward. He is survived by 14 grandchildren, 23 great-grandchildren and his beloved dog, Buckeye.
Bud was blessed with health and long life, remaining adventurously active until death at age 93.
The public is invited to celebrate the life of Bud Ward during a Memorial Service set for Monday, December 9, 2019, from 6-8PM at the Wilson Volunteer Fire Company Hall. A reception after the service will be held at the fire hall. In lieu of flowers, donations may be made to the Wilson Volunteer Fire Company.
Published on December 6, 2019
To plant a tree in memory of Warren (Bud) Francis Ward, please visit Tribute Store.

Plant a tree in memory
of Warren (Bud)

A place to share condolences and memories.
The guestbook expires on March 05, 2020.

Laurie stephenson
Sending prayers and thoughts for the family. My parents Wes and Betty clark always had good things to say about Bud. May god speed cousin.
Gerry smith.
Bud and roger were icons to the village. I so much miss wilson
LIsa Sporleder Stephens
I remember Bud with fondness. He would always help my dad whenever he ran into an issue with a car (or when he was working on one of the "Wards" at #1). He had the utmost respect for Bud. RIP, and our best to all of the family!
Don Creten
Sending sincerest condolences and prayers to your family. You're in my thoughts.
Jean McCollum Upton Hugs and prsyers
Hugs and prayers to Bud's family.
He was a great man. May he Rest in Peace.
Christine wrinkle
My sympathy to all the family. May you find peace in the Savior. Met Mr. Ward a few times but he was very nice to talk with as we played cards in Mark and Audrey's home. So sorry for your loss.
Angela (Ward)Crosswell
Grandpa was a very special man and always there for his family. He was always ready for an adventure. He will be dearly missed by every one.
Steven and Brenda Thibodeau
May GOD's peace abide with you and you family during these trying days and the days filled with happy memories.
Lynnette Watson
Uncle Bud was Blessed with a full life! Prayers of and comfort and peace for his family and friends.
View all