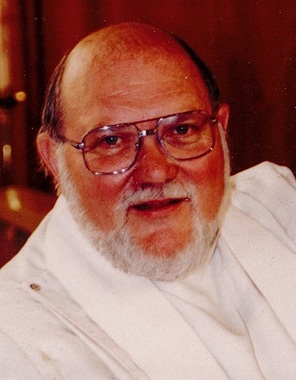 Back to Rev. Otto's story

Rev. Otto G. Struckmann, a retired Lutheran minister who spent more than three decades as pastor of Trinity Lutheran Church in the City of Lockport, died Friday from cardiac complications while in Elderwood at Lockport. He was 85.
Rev. Struckmann was born and raised in St. Charles, Mo., outside St. Louis. He knew as a boy he wanted to be a minister, and at age 13 went off to boarding school to begin his studies. He graduated from St. Paul's College in 1955. In 1959, he earned a Master of Divinity from Concordia Seminary in St. Louis.
His first assignment was in 1960 at St. John Lutheran Church in Angola, where he met Suzanne Post. The couple married on October 14, 1962 and together raised four children. In 1963, the family moved to Easton, PA, where Rev. Struckmann served as pastor of Faith Lutheran Church for a decade.
In 1973, he became pastor of Trinity Lutheran on Saxton Street, where he served the congregation for 32 years. Rev. Struckmann was active in the Lockport community. He served as board Chairman of the Dale Association. He was one of the founders of the Lockport Area Clergy Association and also started the Lockport Area Lutheran Association. Rev. Struckmann was past chaplain for the Lockport Fire Department and was frequently called upon to minister to patients at Lockport Memorial Hospital. Among his recognitions were the Salvation Army Others Award in 1992 and the key to the city.
Rev. Struckmann retired from Trinity Lutheran in 2005. He retained the title Pastor Emeritus and remained active in ministry, which included filling in at Mount Olive Lutheran Church near his home. He was a master gardener, lifelong St. Louis Cardinals fan and an avid reader, who loved mystery novels.
Besides his wife of 57 years, Suzanne, Rev. Struckmann is survived by a daughter, Rachel; three sons, John-David (Cynthia), Mark-Luther (Kathleen) and Paul-Joseph (Alicia Louttit, fiancee); seven grandchildren and one great-grandchild.
Viewing will be from 2 PM to 4 PM and 7 PM to 9 PM on Friday, January 31st at Prudden & Kandt Funeral Home, 242 Genesee St. A viewing also will be held at Noon to 2 PM on Saturday, February 1st at Trinity Lutheran Church, 67 Saxton St., followed by a service of Celebration of the Resurrection at 2 PM. Interment will be in Trinity Lutheran Cemetery.
Memorial donations to the Trinity Lutheran Music Fund, 67 Saxton St., Lockport, NY 14094 would be appreciated. Visit pruddenandkandt.com.
Published on January 28, 2020
To send flowers to the family of Rev. Otto G. Struckmann, please visit Tribute Store.

A place to share condolences and memories.
The guestbook expires on April 27, 2020.

Andy Robinson
From Camp Pioneer as a confirmand to Trinity Lockport..I enjoyed Pastor Struckmann ..he will be missed...well done faithful servant.
Julie Stevenson Rappold
John-David and family,
I am so sorry for your loss. You are in my prayers.
Lois and Patrick McGuinness, Ashley n Ricky Schlitzer Ricky schlitzer
So many happy memories over many years , baptisms, confirmations, mine as well as my kids wow!!, weddings, and so much more, he will be greatly missed, I remember having tears when he turned his keys in, Ashley loved it when he called her Ashley Nicole
View all