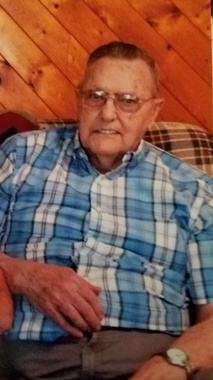 Back to James's story

James F. Moore, Sr., age 93 of Oakfield/Byron, passed away on Monday, January 27, 2020, at The Grand Rehabilitation and Nursing at Batavia. Jim was born December 3, 1926, in Jewel, Pennsylvania, a son of the late Cyrus and Rose Lantz Moore.
In 1945, Jim fibbed his age "a little" to proudly serve his country in the United States Navy, serving during World War II in the Pacific Ocean.
Jim worked as a coal miner at several mines in Pennsylvania and then at the U.S. Gypsum Co. in Oakfield for over 35 years.
On September 7, 1946 he married the love of his life, Helen A. Fulmer. They would have celebrated 74 years of marriage. Out of 73 years of marriage they had three children, James F. (Penny) Moore, Jr. of Appleton, Kenneth (Cheryl) Moore of Elba, and Helen (Howard) Austin of Batavia. "Old Pap" was also very proud of his six grandchildren, Tammy (Michael) Boudreau, Jim III (Amy) Moore, Jeffery (Carrie), Michael, Jason (Kim) and Kimberly Austin. He also had 12 great-grandchildren, Haley, Kylie and Mackenzie Moore, Tyler and Gracie Boudreau, Cameron, Ava, Abigail, Allison, Liam and Brycen Austin and Brynn Peters. He is also survived by his wonderful brother-in-law, Edward Kastelic, who was his coal mining and New York Yankees buddy; along with many nieces and nephews.
He missed his little four legged kid, Killer. Besides his parents, he is predeceased by his brothers, William (Imogene), Jack (Judy) and John Moore; sisters, Minnie, Mae and Ruth Moore, Carrie (Wilburn) Helman, Dorothy Davis, Betty Kastelic and Jean (Ron) Gibson; and his brother-in-law, Dean (Edith) Fulmer.
Friends may call from 3 PM.-6 PM on Thursday at the Burdett & Sanford Funeral Home, 11 Maple Avenue, Oakfield, where services will immediately follow visitation at 6 PM. Burial, with Military Honors will be held at 11 AM Friday at Cary Cemetery in Oakfield.
In lieu of flowers, memorials are suggested to the Byron First Presbyterian Church, P.O. Box 206, Byron, New York 14422.
To leave a condolence, share a story or light a candle, please visit burdettandsanford.com.
Published on January 28, 2020
To send flowers to the family of James F. Moore, Sr., please visit Tribute Store.

Send flowers
in memory of James

A place to share condolences and memories.
The guestbook expires on April 27, 2020.

Dick Owen
Sorry to learn of the loss of your father. May you find peace through this difficult time.
View all