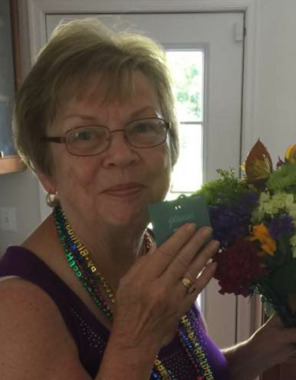 Back to Bonnie's story

We are saddened to announce the passing of Bonnie Carol Marin (nee Blanchard) on January 30th, 2020.
Bonnie was a beloved daughter to the late Warren and Eunice Blanchard of Lockport, NY and beloved sister to the late Richard Blanchard.
She was born on June 10, 1944. Born and raised in Lockport, NY, Bonnie graduated from Lockport High School in 1962. She graduated nursing school from Buffalo General Hospital School of Nursing in 1965.
Married in 1965 to Joseph Marin, she raised three children, Melanie Marin, Joseph Marin and Meredith Wallenmeyer, who survive her and mourn her loss. She is also mourned by her "adopted" son Anthony Langtry; and her grandchildren, Adara Anisman and Dustin Wallenmeyer.
Bonnie dedicated her life to helping others. She was a nurse for all of her working career. In retirement, she always put herself second, helping family, friends, neighbors, her community, animals and all those less fortunate than she. She has spent the last 13 years living in the Villages at Providence in O'Fallon, Missouri where she enjoyed a loving community of neighbors and friends.
Her family asks that all who love her and want to honor her wishes donate to her charity of choice, The Humane Society of Missouri www.hsmo.org instead of sending flowers.
Memorial Service will be held at BAUE FUNERAL HOMES at 311 Wood Street in O'Fallon, MO at 2 PM on Saturday, February 8 with reception to follow at Bonnie's home: 707 Thayer Court, O'Fallon, MO.
Published on February 2, 2020
To send flowers to the family of Bonnie Carol Marin, please visit Tribute Store.

Send flowers
in memory of Bonnie

A place to share condolences and memories.
The guestbook expires on May 01, 2020.

Sandy Jackett
My thoughts and prayers are with you. Bonnie was such a fun loving person and a wonderful daughter to her Mom and Dad.
Patti Prince Knack
So sad to hear of Bennie's passing. I graduated with her from BGH in 1965. Sympathy to her family. God Bless.
Wendy Hudson Wenninger
Sending my deepest sympathies to Bonnie’s family . I was one of her classmates in nursing school and also in her wedding. May she Rest In Peace.
View all